How to wear snow boots

How to wear snow boots 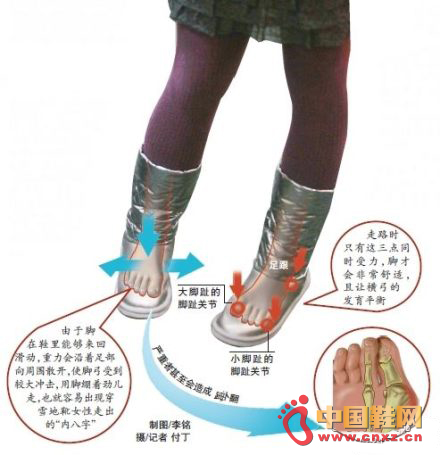 [This site - shoes and life] warm, soft snow boots in recent years has become a young woman in winter "darling", some people buy it is a few pairs. However, foreign medical experts have warned that snow boots may cause permanent damage to women's feet. The Internet is also rumors: wearing "cottage" snow boots lead to health hazards, even severe disability!

Recently, British media reported that a survey conducted by the British Academy of Orthopedic Sciences showed that many podiatrists have found that the number of women suffering from toe deformity and foot pain in the UK has risen sharply in recent years. The culprit is the snow boots. The director of the hospital, Ian Drilsdale, said that the materials used inside and outside the snow boots are very soft, and the internal space is relatively large. After putting on the back foot, there will be a certain degree of sliding, and each step is taken. Gravity disperses around the foot, causing the arch to be subject to greater impact, causing injury to the foot, ankles, and even the buttocks.

When standing or walking in snow boots, the feet will unconsciously appear as an asymmetrical figure eight. Experts have used the name UGG, the most famous brand of snow boots, to use a special term â€œUGG stepâ€. The beginning of foot deformity.

However, many people are frightened by the fact that the post on the Internet that "The street boots are so dangerous" has caused many people to feel scared. The post stated that if the "cottage" snow boots are worn for more than six months, problems may arise in the feet, ankles, hips, etc., and they may even be disabled, causing permanent deformities.

In the end, the snow boots will not cause harm to the feet? Yesterday, the reporter interviewed the Guangzhou Military Region Wuhan General Hospital Director of orthopedics Professor Cai Xianhua. He said that so far no patient has been admitted to the "Nine Characters" caused by wearing snow boots. According to medical analysis, most of the "inner characters" are related to heredity, which is caused by problems in the thigh joints and hip joints. However, wearing snow boots for a long time does hurt the feet.

The vast majority of snow boots in the market today are flat, no arc, and people's feet have arches, this flat bottom design of snow boots is not ergonomic, snow boots wear more energy, for a long time The tendons of the tendons and the soles of the feet are not fully rested and tend to cause tendonitis and fasciitis, but generally it does not cause serious injuries. The possibility of "disabling" is not great. Be careful not to walk in snow boots for a long time. You should take a rest after 1 hour, especially if you want to take the rough road. Children in the growing period should not wear snow boots, so as not to affect bone development. â€œThe name of the snow boots may be misleading to the public, thinking that snow boots should be worn when it is snowing. In fact, snow boots are not suitable for walking outdoors, because the feet are difficult to find a balance point, and it is easy to sprain the ankle,â€ said Professor Cai.

Do not buy a boot to look good

Cai Xianhua introduced that the hospital orthopedic department treats a large number of patients who suffer from ankle, instep and toe injuries due to improper use of boots every year, especially young women, mainly in autumn and winter. The condition is mainly manifested in the following two aspects.

First, the hoop is too tight, resulting in an ankle injury, swelling in the leg and calf, and pain at the back of the foot. A tighter boot tube can make the leg lines look more beautiful, but the pursuit of too tight, too thin effect, the blood circulation of the feet and legs will be affected, the blood circulation of the peripheral veins will be blocked, causing leg pain , swelling, causing inflammation around the tendon, tenosynovitis and other diseases. It is recommended to try on when buying boots and walk 10-15 minutes. Boots should be placed in a space where they can be put into a finger, and the texture should be soft, breathable full-skinned fabric.

Second, the heel is too high, resulting in back pain. After putting on heels with too high heels, the body can not help leaning forward. The weight of the whole body is concentrated on the forefoot, toes and knees, which leads to overload of the muscle ligaments in the toes, legs, waist, etc., walking and standing for a long time. After the lower limbs are susceptible to fatigue and pain, a long time prone to chronic pain, leg pain, back pain and other symptoms. If the heel is too thin and the toe is too narrow, it can easily cause ankle sprains and toe valgus. It is recommended that the boot should not exceed 6 cm in size when purchasing boots, preferably 4 cm or less. Heels should not be too small or too fine. The boot tip should be slightly loose to give more space to the toes and feet.

Tips: How to Wear Snow Boots

* Try a few more steps when trying on snow boots. Do not choose oversized snow boots or try to wear double thick socks and wear it again.

* When you go out in snow boots, you must put an insole to make your feet more fixed in your shoes.

* Authentic base is good in toughness, good wearing comfort, and will not appear as a result of the base's hard "not to follow foot" phenomenon.

* It is best to choose boots with smooth fur and no strange odor to prevent the waste hairs from infecting the feet with bacteria.

Military and police Camouflage Fabric is different from ordinary printed fabric, and has its own remarkable characteristics. The color of a camouflage is made of black, brown, dark green and emerald green. After special treatment, the surface of the camouflage has near infrared retardant(IRR) function. At the same time, it can be added the functions of flame retardant and waterproof. In addition, high breaking and tearing strength and good printing color fastness are the basic requirements.